Rajasthani Laal Maas is a traditional Rajasthani dish which can be made as hot as you like. It gets its color from the red chillies which are used to cook it. It tastes the best when eaten combined with bajra roti. This is how you can enjoy the delicious recipe at home or you can just visit Handi and savor the hot and spicy Rajasthani delight 🙂 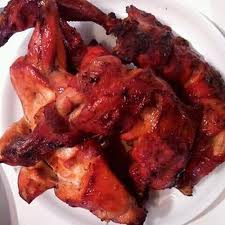 Just like an ancestral property, the progeny of Indian cuisine is passed on from one generation to another. Each region in India boasts of its specific flavor and every state has one or more dish to endorse. With every region, changes taste, cuisines, ingredients, specialties and history of food. When it comes to Rajasthan, the land of kings, agriculture and diverse geography, food holds its own unique past.

Rajasthan food holds a special place in the hearts of the Indian people as it represents the ethos and lifestyle of the noble men that lived thousands of years ago. Perhaps the best known Rajasthani food is the combination of dal, bati and churma, the skillfully devised cuisine, which truly unravels the magic of Rajasthan. It is the most wanted dish amongst the travelers exploring Rajasthan. 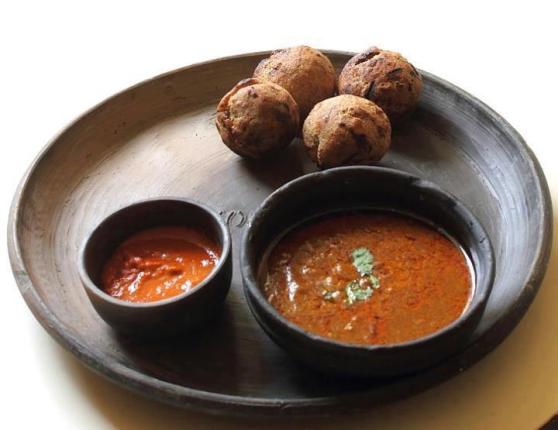 Though, it is hard to tell the exact time when Dal Bati came into existence, yet two most believed facts constitute the history of Dal Bati in Mewar culture.

The first one is the war like lifestyle of the Rajputs. During wars, when adverse conditions used to surround armies, long lasting food was a chief requirement. With the available ingredients in barren lands of Rajasthan and scarcity of water, the most feasible solution was to bake the dough of wheat in bulk. These could be cooked fast, and in large portions to suffice the entire army. These baked wheat dough were then named as Bati and later addition to them included Churma(sweetened cereals) and Dal( mixture of lentils).

The second fact is the formation of Batis by Tribal groups of Rajasthan. These nomadic tribal people would keep dough of wheat under sand before leaving for their work. Till their return, dough would get baked due to the scorching heat of the sun over sand. Bati was thus their prime resource of food, as it was easy to make, cheap, durable and healthy.

The three together, simple though they sound, make a very filling meal. No Rajasthani festive or wedding menu is complete without this popular recipe. This sensational meal is cooked and served in the most authentic way at Handi restaurant, Jaipur.

Visit Handi to tantalize your taste buds with the royal taste of the Rajasthani cuisine and to have a perfectly filling meal of the delicious Dal, Bati and Churma 🙂

Which dinner party is complete without biryani? Are you the person who can smell the versatile aroma of the oven-baked Biryani by the mere mention of it? If yes, then Handi is the perfect destination for you. 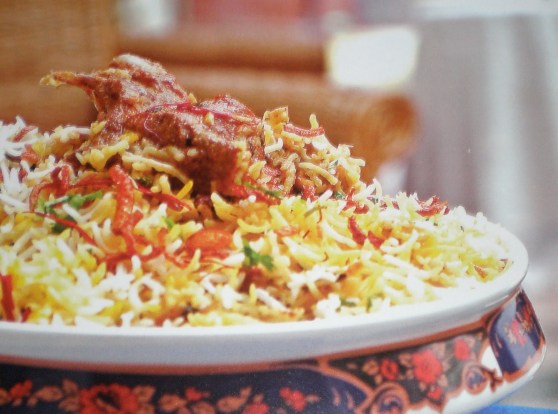 India is the country where the authentic dish of biryani has been so immensely experimented with and been cooked to book itself into one of the best recipes of the authentic and conventional cuisines of the country. It is indeed a dish that has gone world over and today is found to be prepared in various cuisines in different methods, with different spices, ingredients, all culturally, geographically and even religiously specific.

So how is the basic biryani made? It is a mixture of marinated or fish, mutton or chicken with special spices, pickles and curd, cooked well before it can be added onto half cooked rice with a touch of saffron and other garnish like raisins, cashew nuts and even caramalised onions.

Biryani in Rajasthan is cooked very differently, especially if you try it at Handi Restaurant where the sight of biryani will bring an involuntary glint in your eyes while sending your taste buds spiraling. The diverse varieties of biryanis are available at Handi. Handi Mutton Biryani, served with raita is the most relished and favored dish to savor at Handi. Other popular biryanis at Handi are chicken biryani and Handi Veg biryani.

Biryani at Handi is a delicacy, savoury, and a must try indeed!!

The cuisine of Rajasthan is one of the most popular and unique cuisines which everyone who visits India would like to try at least once. The Rajasthani cuisine does not just offer a fabulous variety of vegetarian food but also excel in non vegetarian mouthwatering dishes. The spice content is quite high in comparison to other Indian cuisines, but the food is absolutely scrumptious. 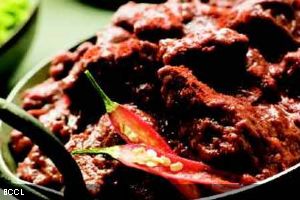 The ancient princely state of Rajasthan gave rise to a royal cuisine. Rajasthani non vegetarian cuisine was basically derived post hunting. The Rajas who went on hunting expeditions ate the meat or the fowl that they brought back. Even today, Rajasthani princely feasts flaunt meat cuisines that are incomparable. The most famous non-vegetarian delights are Laal Maas prepared as spicy mutton preparation which gets its color from Rajasthani red chillies. Laal maas is a perfectly spicy, hot and very delicious aromatic recipe loved by the spicy food lovers.

The laal maas tastes best when accompanied by the authentic Bajra ke Roti. The dish is outstanding & the meats just melt in the mouth. The combo of laal maas & Bajra ke roti is authentic & thoroughly enjoyable. So try the combo meal of Laal Maas and Roti at Handi restaurant along with many other dishes.

A trip to Rajasthan is simply not done if you are not able to bite your teeth into this fiery but succulent dish at Handi Restaurant, Jaipur.

“What did you do in school today?” “Who did you play with at recess?” “Did you see that article in the newspaper?” Eating together as a family is one of those things that don’t seem like such a big deal. But it can make a big difference for your family in terms of self-image, sense of security, self-esteem and overall sense of happiness. 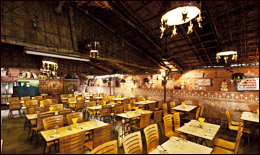 These little reasons together come to make a big reason why families should go out for family dinner at least once in a while. Try asking a lot of families and friends about how often they dine together; the answer would be ‘Barely’. Some families do agree with the fact that they ensure having dinner together at the same table at the same time but somehow one or the other person is busy and not able to join in. That is the reason why all the families should make it a point to dine out once in a while. 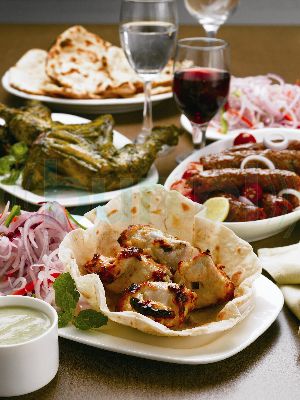 When you visit a restaurant with your family and relatives you get a perfect set up and a carefree vibe which assures that you will not have to be concerned about cooking the food or washing the dishes. When you sit and look at the menu you have an extremely wide variety of dishes and cuisines to order from and everyone in the family is content. A happy heart leads to a healthy conversation. While sitting and waiting for the food to come a lot of conversations are made like the parents might talk about their work at office, the children can discuss tales of their schools, college and some worries as well. Also such family outings create a different bond among all the members as they get to know more about each others’ lives, eating preferences, which they might not be able to notice at home as there are a lot of distractions on the mind.

Handi Restaurant is a perfect place to enjoy both vegetarian and non vegetarian cuisines and a wonderful ambiance for families as it goes beyond being just a pleasurable experience to being a necessity to develop a better bond and understanding as well as adding to the energy levels because of the pleasant environment, prompt service and a delightful menu.