Rogan Josh !! This aromatic lamb curry may be a signature dish of the Himalayan state of Kashmir but it is hot-favorite around the world among non-vegetarians. Brimming with flavors of ginger, fennel and marked by the characteristic brilliant red color, the dish is very fragrant and truly a celebration of all senses.

It is believed that the roots of the Rogan Josh originated in Persia. It derives its name too from Persian words: Rogan which means “oil” and Josh means “intense heat”. The flavors and style have been brought in to India during the innumerable invasions it went through in the past.

The dish has been adapted to be made in various ways around the world. While any form of meat can be used in preparing it, but the traditional Kashmiri Rogan Josh is made with lamb or goat meat and flavored by the signature spices, such as asafoetida, fennel seeds and the dried ginger powder, along with a variation of combination of cinnamon, cardamom, and clove. Yogurt is added to add the slight tang and texture to the sauce. There are no tomatoes added to the traditional dish; not even to enhance color. Its characteristic brilliant red color traditionally comes from liberal amounts of dried Kashmiri chilies that have been de-seeded to reduce their heat.

When your relatives or friends come to Jaipur and demand to gorge on the authentic Rajasthani Food, then the Handi Restaurant, Jaipur is the place where you must take them to.

Brilliant food and amazing ambiance! Embellished with traditional decors, the Handi Restaurant, Jaipur is a food-paradise for those who are close to their land. The menu offers a tremendous selection of freshly prepared authentic veg and non-veg dishes, not to mention tempting dessert offerings, to overwhelm senses of the discerning foodies. From butter chicken to Laal Maas to handi veg Biryaani to Kebabs, every dish is prepared with attention to details under watchful eyes of skilled chefs such that food fantasy of every epicurean is fulfilled to the maximum.

Located at M.I. Road and Vaishali Nagar, the restaurant scores full points, not only for its mouth-watering dishes, but also for the ambiance and service. What else makes up for a satiating dining experience? Pleasant ambiance and choicest of starters, main-course, desserts and drinks served in double quick time makes this place a wonderful choice to have spectacular, authentic Rajasthani experience. This beautiful restaurant is spread over terrace to let diners enjoy good food with amazing cool-breeze and the city sight.

Visit Handi with your family, eat to your heart’s content and return home fully satisfied.

Diwali means family reunions and feasting over delicious food. As festivals and feasting go hand-in-hand, there is no wonder that dining out at your favorite restaurant with your close-ones is something that is at the top of your mind these days. 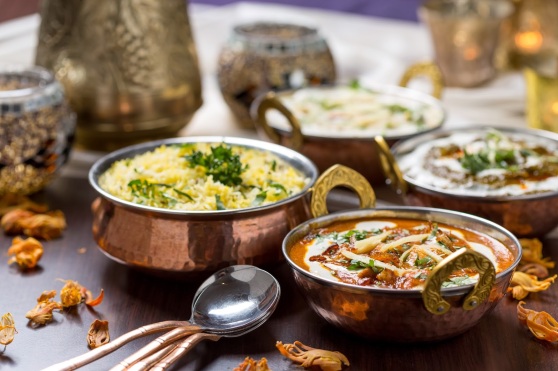 If you are craving authentic Rajasthani food then Handi Restaurant,Jaipur is the place where you should be with your friends and family this Diwali. Authenticity at its best is what you can expect here. Handi is one of the few places in Jaipur which serves authentic local delicacies. The variety and taste is sure to leave you wanting for more here. Right from its appetizing starters, delicious main course and tempting desserts, Handi is a restaurant that will certainly leave your tummy happy and satisfied. Having two outlets in Jaipur, one at Vaishali Nagar and another at MI Road, Handi Restaurant is surely worth a visit for its authenticity intact menu.

So this Diwali, gorge on traditional mouth-watering delicacies and brighten up your festive dining with your family at Handi Restaurant, Jaipur. 🙂

Think of Lal Maas and the only name that crops up in mind is the  Handi Restaurant, Jaipur. With two outlets in Jaipur, the famous Handi Restaurant is a paradise for non-veg food lovers. Best known for its Muglai and Tandoori food, it is the ultimate place to experience finger-licking dining. The menu here boasts of Jungli Maas, Keema Matar, Seekh Kabab Masala, Adraki Chicken to name a few. Handi Meat and Handi Chicken is our specialty and a must try !! To roundoff your meal with delightful desserts, we offer  Gulab Jamun, Maal Pua, Vanilla Ice-cream with chocolate sauce that completes your meal happily. As for drinks, there is lassi, fresh juices, soda drinks and plenty of mocktails to quench your thirst. 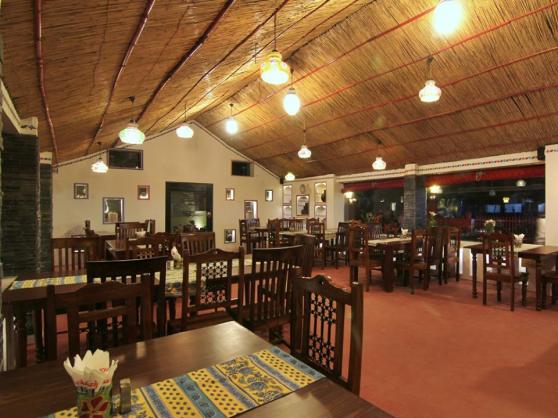 The meat delicacies at Handi Restaurant, Jaipur are so delectable that it makes you overlook everything- be it ambiance, décor or client service ( although all of them are near to perfection 🙂 ). The interior is sophisticated and given an ethnic feel. Along with tantalizing food & tempting dessert, if you want to enjoy the cool night breeze, you can opt for outdoor seating and enjoy amazing view of the Jaipur city.

The Handi has everything what it takes to be your favorite non-veg food joint in the Pink City. With your friends and family, drop in here and tickle your taste-buds with our lavish offerings.

There is no more honorable way of ending any meal than a DESSERT. Tasty & Fun! It is that delicious and important part a meal that can turn your any average meal into a memorable event. So what if you’re a weight-watcher? A little bit of sugar never did anyone harm. 🙂

Indulge in the yummy treat, ‘Fruit Salad Ice-cream’ from the Handi Restaurant, Jaipur and give a perfect ending to your meal. It is so high-in-taste that you will be tempted to have it first.

Enjoy your meal, enjoy your dessert !

We love rain. The brisker breeze, the coolness, the crisp freshness in the air makes for a very cozy feeling. Along with this comfy feeling comes a craving for something crisp and yum. And when it comes to comfort food, ‘Seekh Kabab’ makes a perfect sense during the rainy season. The combination of drizzle and hot crisp Seekh Kabab is simply awesome.

Made from minced mutton and chicken meat, Seekh kababs are perfect rainy weather food. Being a terrific appetizer, they are also perfect as a starter. At the same time, they also make a nice side dish to the main meal.

During pouring days, a hot cup of masala tea is always a welcome. Therefore Seekh Kabab with a hot cup of tea makes a way for the perfect celebration of the monsoon. Take the opportunity of the weather and enjoy sinfully delicious Seekh Kabab with your family & friends at the Handi Restaurant, Jaipur.

Gulab Jamun !!! Who doesn’t love this yummilicious dessert? This mouth-melting sweet is almost everyone’s favorite.  It is so inviting that it’s hard to say “NO” to it. 🙂

This popular Indian dessert is consist of dumplings made of thickened or reduced milk, which is then deep fried and dunked into cardamom & rose flavored sugar syrup. The balls become juicy and super soft on getting well soaked in the sugar syrup. It derives its name from two words: Gulab which means rose (for the rose flavored syrup) and Jamun which is a kind of deep purple colored Indian berry (the cooked dumplings are dark brown in color). It can be enjoyed both hot as well as cold. Every bite of this scrumptious dessert tastes so heavenly. Sensation of having its dumpling melting in mouth and oozing out extra delicious sweet syrup is hard to describe in words.

Handi Restaurant serves very luscious and super soft Gulab-Jamun that will leave you craving for more. Ditch your calories count and enjoy the fluffiness of the jamuns  at Handi  to add extra sweetness to your meal. 🙂

For reservations and to book your table, please contact :
HANDI RESTAURANT

Apart from the delicious food and exotic ambiance, Handi at Vaishali Nagar brings for you a Melodious Thursday where there are live music performances every Thursday to delight your ears 🙂

The melodious Thursday is followed by a magical weekend as Fridays, Saturdays and Sundays bring for you magic shows to make all your weekends special !! 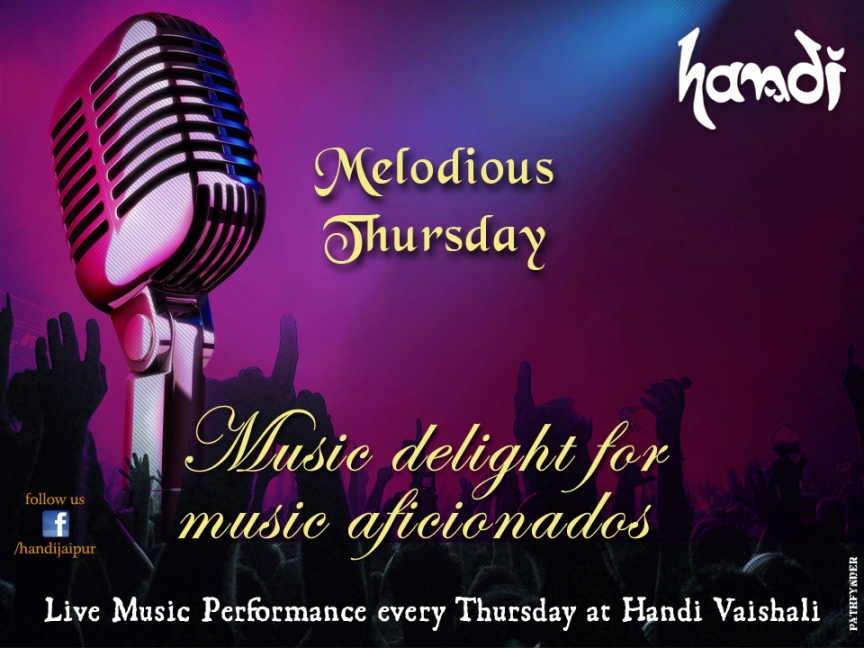 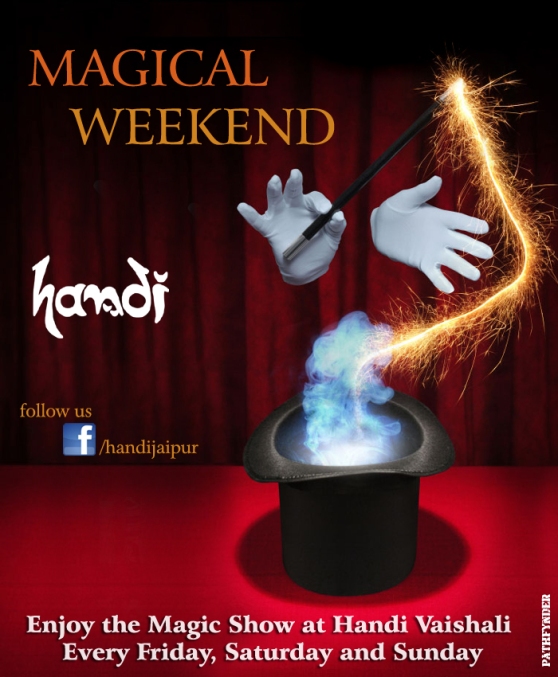 So what exactly comes to your mind when we ask you your top favorite foods? Generally, people of all ages never ever forget to call out ‘Biryani’ as one of their top favorites. But do you know from where did your favorite dish come into existence??

Biryani is believed to be a Persian dish as the word ‘Biryani’ came from Persian ‘Biryan’ meaning fried or roasted before cooking that is the hidden sapor behind this scrumptious dish. Biryani, for centuries now, has been a popular dish among Muslims while moving with them civilization after civilization. It claimed its proper cooking style during the Mughal era and that’s the reason why it is called a “food fit for kings”.

Cooking style of biryani is different for different communities but the main essence behind making of biryani is that rice and meat or vegetables are cooked separately and later, brought together and steamed. The most basic ingredients that each and every Biryani recipe uses are onion, garlic, ghee, mint leaves and most importantly, the ‘Indian Khada masalas’ like the cardamom, cinnamon, nutmeg mace, cloves, bay leaves etc. The popular biryani meats are chicken, lamb, mutton, fish, shrimps, quails and sometimes egg and even potatoes.

Out of the various varieties of Biryani, Handi serves the delicious mutton biryani, chicken biryani and veg. biryani and people love to have all the biryanis with ‘Raita’. One can have a variety of things with Biryani like the chilling mixed veg. raita , sliced masala onions or vinegar onions and not to be missed: the tangy mint chutney. Yummy!!! Isn’t your mouth watering? 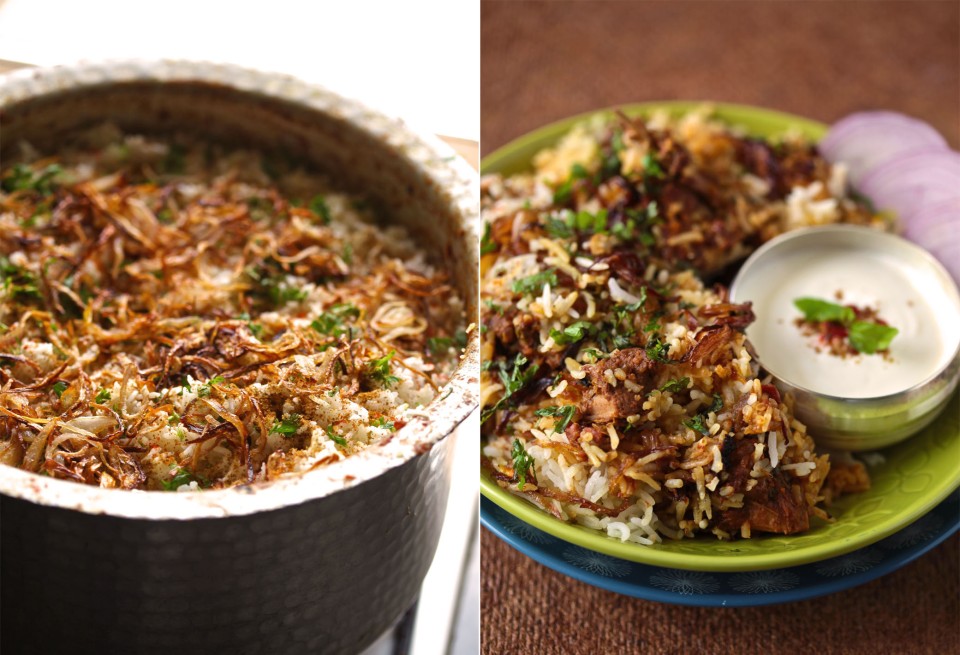 What do we say about the magical, flavorsome and aromatic Chicken Biryani? You have to come down yourself and gorge into it !! 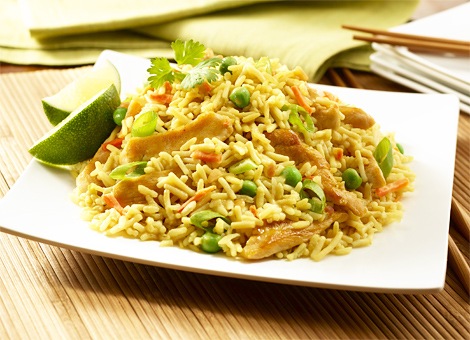 Veg. biryani includes all the vegetables life onions, potatoes, cauliflower chopped and fried together with the ‘masalas’ followed by mixing with steamed rice. Doesn’t it all seem damn sumptuous?

You can have the piquant taste of these delectable Biryani dishes at Handi Restaurant located at M.I. road and Vaishali Nagar to satisfy your taste buds any day, anytime !!

Traditionally known as Murgh Makhani, a platter of Butter chicken is suitable for any occasion and easily finds its way to every food menu that boasts of authentic Indian delights.

A popular North Indian cuisine, Butter chicken is actually chicken marinated overnight in yoghurt, along with various Indian spices (like coriander, turmeric, garam masala, lime, cumin, methi, garlic and ginger), and cooked in tomato puree. Though it seems otherwise, making the chicken dish is not at all a difficult task, provided you have the right recipe with you. Butter Chicken is Handi’s autographed delicacy.

In the following lines, we have explained a very easy recipe for Indian butter chicken boneless, just for you. Let us tell you how to make this delicious chicken dish, and then surprise your guests with this relishing cuisine at this Holi get together.

How to make Butter Chicken Boneless?

Its mouthwatering taste can be enjoyed with Naan, Rotis or steamed rice, which makes it a hot favorite among chicken lovers around the world. The dish tastes mild, so you can modify the quantity of spices.